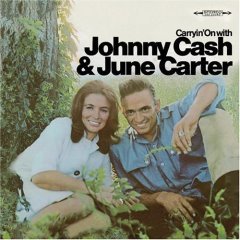 $15.95
Back in their commercial heyday as a duet team, June Carter Cash always managed to bring out a lighter, more playful side of her often somber and serious husband, the famed "Man in Black." Among these 13 tracks (11 of them originally released on the 1967 album plus 2 bonus tracks) are familiar titles like the naughty, cat-scratch-fever hit "Jackson" and their soulfully twangy version of Bob Dylan's "It Ain't Me, Babe." But Cash and Carter also breathe understated fire and shared sensuality into more unlikely material, like their loping, folksy reading of Richard Fariña's "Pack Up Your Sorrows," a pair of Ray Charles R&B standards--"I Got a Woman" and "What'd I Say"--and memorable original compositions like the class-conscious "Shantytown" and a nostalgic love lament called "Oh, What a Good Thing We Had."