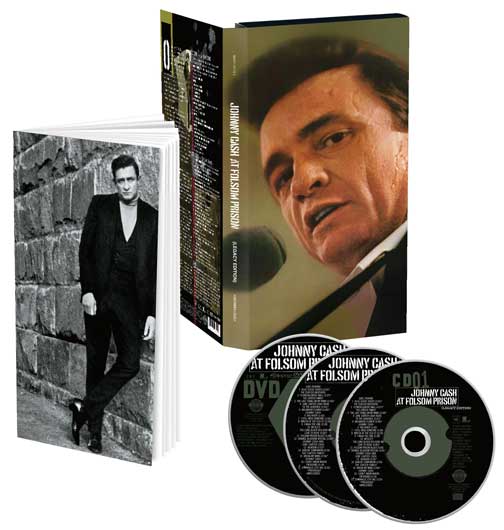 Its one of those dates that is embedded in music history. January 13, 1968, the day that Johnny Cash and his crew - June Carter (two months before their wedding), Columbia staff producer Bob Johnston, Carl Perkins, the Statler Brothers, and the Tennessee Three (guitarist Luther Perkins, bassist Marshall Grant, drummer W.S. "Fluke" Holland), rolled into northern California's notorious maximum security lockup and gave a performance that changed Cash's career arc and the future of popular music. Johnny Cash At Folsom Prison, the LP issued on Columbia Records the following May, became a cultural benchmark in the midst of the single most tumultuous year in American history since the end of World War II. It was more than a record album - it was the turning point for a generation.

Forty years later, the Cash archives in Tennessee continue to dazzle researchers with their riches. In fact, as rarely known by even the most ardent fans, and rarely mentioned in Cash writings until now - there were two Folsom shows performed and recorded that day: The first show, the bulk of which comprised the classic, familiar 16-song album; and a longer second show, the bulk of whose 26 tracks (except for two songs) were put on the shelf.

JOHNNY CASH AT FOLSOM PRISON: LEGACY EDITION has been a long time coming, indeed. The revealing three-disc (2 CD+DVD) close-up of that day now presents the entire unvarnished 65-minute first show on disc one - expletives intact for the first time, and with seven previously unissued tracks; and the entire 75-minute second show on disc two, with 24 previously unissued tracks (out of 26). It's topped off with a new documentary DVD - featuring exclusive footage from inside Folsom, interviews with Merle Haggard, Rosanne Cash, Marty Stuart, and former inmates who witnessed the concert, and unpublished photography by Jim Marshall.

JOHNNY CASH AT FOLSOM PRISON: LEGACY EDITION, the latest deluxe display-book box set entry in the Legacy Edition series will be available at all physical and digital outlets starting October 14th through Columbia/Legacy, a division of SONY BMG MUSIC ENTERTAINMENT.

DISC ONE - SHOW ONE:

The Statler Brothers
3. This Ole House*

The Statler Brothers
5. You Can't Have Your Kate and Edith, Too*
6. Flowers On The Wall*
7. How Great Thou Art*

Johnny Cash with June Carter
16. Give My Love To Rose