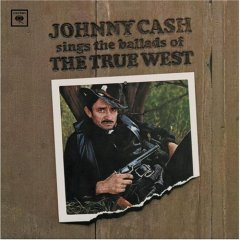 Sings the Ballads of the True West

$15.95
Originally released in 1965 as a double album, Ballads weaves Cash's narrations and original compositions with traditional songs and interpretations of other writers' material to draw one man's portrait of the Old West. Cash turns in some of his sturdiest vocals, virtually inhabiting the likes of "I Ride an Old Paint" and Carl Perkins's morbid "Ballad of Boot Hill." And he gets points for not scrubbing up some of the more raggedy old traditional lyrics. But there's often too much extraneous stuff--background singers, strings, sound effects--and while they are clearly to Cash's specifications and executed seamlessly, his own weather-beaten voice alone would usually have been more effective; for all the drama in his vocals, too much of this exasperating set sounds like background music. By the way, this album's mythmaking "Hardin Wouldn't Run" provided the basis for Bob Dylan's mythmaking "John Wesley Harding." The 2002 reissue adds a pair of bonus tracks.