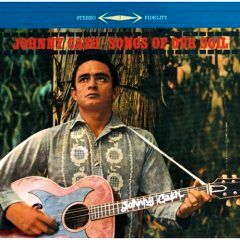 Songs of Our Soil

$15.95
This particular album was inspired by the folk revival, including as it did, several traditional songs as well as original songs written by Johnny, mainly based on experiences of growing up in a farming community.
Five Feet High and Rising was written about the Arkansas floods in 1937 when Johnny, only five, was too young to appreciate the gravity of the situation, but old enough to retain a deep and lasting impression of wonderment.
Clementine, while based loosely on the traditional song My Darling Clementine, is given new lyrics and sounds like a completely different song - it's very amusing. I wanna Go Home is a cover of a song better known these days as Sloop John B, the title used by the Beach boys when they recorded it.
Old Apache Squaw is one of many songs that Johnny has recorded about the people who inhabited America before Columbus discovered it - understandably, given his fascination with and empathy for Native Americans.
The Great Speckled Bird is a cover of Roy Acuff's classic gospel song. Although not part of the original album, the inclusion of two of Johnny's country hits from around that time - I Got Stripes and You Dreamer You - is most welcome.
There are many other fine songs on this fascinating album. If you enjoy Cashs early music, you will love this