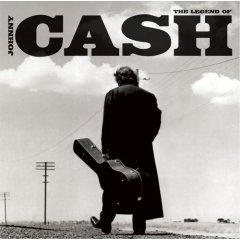 The Legend of Johnny Cash

$19.95
This introduction to the Man in Black's catalog is about as fine a one as can be found on one disc, primarily because the 21 classic tracks span J.R. Cash's entire career, from his first rockabilly single, "Hey, Porter"/"Cry! Cry! Cry!" (Sun Records, 1955), to his last significant alt-country tracks (American Recordings, 2003). Though Cash had his peaks and valleys in the studio, what shines brightly on this collection is how constant--how unwavering--his creativity remained, whether he was writing and performing original material or interpreting the work of others. His voice, too, remained a majestic thing of wonder, even as Cash often sang off-beat; settled his bass-baritone somewhere around, if not on the note; and cared more about power and emotion than strict rules of measure--something that became especially important as illness changed his great oaken voice into a frail instrument. In this way, he was able to infuse novelty songs ("One Piece at a Time," "A Boy Named Sue") with undeniable cool and maintain the poetry of Kris Kristofferson's "Sunday Morning Coming Down" even in the awful advent of a gloppy, too-peppy string section. Other chestnuts here take on new dimension in retrospect. "Jackson," a duet with wife June Carter Cash, seemed almost comedic ("hotter than a pepper sprout") when it was released, but now reveals the couple's own white-hot sexuality, primarily in June's elegant, if straightahead vocal. The surprise of The Legend of Johnny Cash is how seamlessly the newer material blends with the seminal, and how full-circle it sometimes comes: Soundgarden's "Rusty Cage" doesn't seem markedly different from the quietly defiant songs that Cash defined himself with in the '50s and early '60s. Yet the compilation producers, like Cash himself, saved the best for last. "Hurt," Trent Reznor's poignant meditation on addiction, is devastating as written, but becom